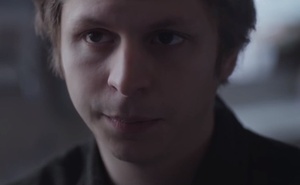 Michael Cera’s impressive directorial debut, based on a short story by Bruce Jay Friedman, features a nervous young dude (Cera) trying to convince his fearsome boss to sing back up on a Kelis track in order to save the life of his dying father.

Made as part of the JASH Youtube network founded by the dream team lineup of Cera, Sarah Silverman, Reggie Watts, Tim Heidecker and Eric Wareheim.