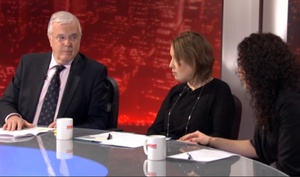 Get yourself some tay.

Vincent Browne: “The reality is, simply Peter, deal with this simple point.”

Peter Mathews: “I’ll deal with the point. Do you know what the simple point is?”

Browne: “No, no wait a minute. The simple point, this is the law as it now is. So what’s the problem?”

Mathews: “And what’s the Constitution?”

Mathews: “Well let’s go back to the plain English.”

Mathews: “Vincent, legislation nearly always in every area that it’s carried out gets amended. Constitutions only get amended when the people actually vote on the amendment, or change it.”

Sarah McInerney: “It’s interesting actually there are some in Fine Gael who think that you can get round it, again for people that I was speaking to last week, one of the alternatives, sort of, some people have come up with and which they would like to see is for the legislation to say where there is a real and substantial risk to the life of the mother that the medical profession can act or it can intervene and just not include suicide but not preclude suicide.”

Mathews: “But that’s, that was what I said Vincent.”

Mathews: “You were saying leave it there and it won’t be applied anyway, because it’s, you know, the experience is, you know, that it is not going to be a contentious area.”

Browne: “No, I didn’t say that it wouldn’t be. I was saying that if your premise is correct, that if there is no medical basis to terminate a pregnancy because of a threat to suicide, of suicide, if if that is correct then it will never happen under the legislation, therefore there is no issue of principle here.”

McInerney: “Well I’m not saying that, I’m saying that is what some people would like to see happen, yeah,”

Mathews: “Well, this is the area of professional judgment, when the professional judgment is carried out on the solemn duty to implement the Constitution which says equal rights of life to everybody who comes into existence, whether it be a baby in the earliest stages after conception, the mother or the father, there’s three people involved in the family.”

Kennedy: “I accept that when those rights come into conflict, when the right to life of the foetus conflicts with the right to life of the mother including the risk of suicide. That is the law and that law, there has been a delay for over 21 years in introducing a legal framework in which to make that a reality and to be quite frank I think the people in this country have had enough and they want at a bare minimum, I don’t think X case legislation, X case legislation, goes far enough.”

Mathews: “Sinead, would you mind, when are the rights of life to those three people in conflict. They’re never in conflict.”

Mathews: “Of a baby, don’t say the word foetus.”

Kennedy: “In a life threatening situation.”

Mathews: “Do you believe that life begins at conception?”

Mathews: “There you go, there now, we know where you stand.”

Kennedy: “There is no legal or ethical consensus on where life begins. Now you may believe that life begins at conception but that is not an issue, again it’s not what is at issue here..”

Mathews: “Sinead, our Constitution, before you even start wondering do you understand plain english, takes the precept that every life begins at conception.”

Kennedy: “I have no difficulty understanding plain English. Our Constitution conflates the life of a foetus with that of a pregnant woman and I disagree with this as do I believe the vast majority of people in this country, because when it comes down to it people do not think that its the same thing. They really don’t think it is the same thing. They do not think that woman with all her life in front of her, her hopes and dreams are the exact same thing as a fertilised egg. Nobody really believes that. Maybe a small number of people do but when those issues come into conflict the vast majority of people think what is the, the more valuable life in that context when you have to make a judgment and the vast majority of people will side with the pregnant woman.”

Browne: “A lot of people do believe that its, there is a human life there prior to birth and I don’t think that’s necessarily contentious. Peter can I just ask you one further point.”

Mathews: “Well, Sinead says it is.”

Browne: “Peter, suppose your daughter were to get married and she were to become pregnant. I’m sure you’d be delighted at the prospect of a child being born to her and you becoming a grandfather and I am certain you’d be a wonderful grandfather.”

Browne: “I’m not a grandfather.”

Browne: “But if in the course of the pregnancy your daughter became seriously ill and if it became obvious that if the pregnancy were to continue her health would be seriously impaired for the rest of her life, and would you think that anybody other than she should take the decision with regard to what should happen?”

Mathews: “But of course the mother, the expectant mother, will have a responsibility to the unborn child and she will make that decision.”

Browne: “And it should be up to her and her alone. Ultimately. Obviously her husband…”

Mathews: “But that’s a matter of fact Vincent. Yeah, and her husband too yeah…”

Browne: “But wouldn’t it be terrible, wouldn’t it be a terrible intrusion on her autonomy and her integrity to say that somebody else should decide what should happen to her and should…”

Mathews: “But you’re talking about a theoretical situation that probably wouldn’t arise.”

Browne: “But these things do arise Peter, but I’m just putting it to you. Isn’t there something terribly…”

Mathews: “Do they? Do they Vincent Can you name a case?”

Browne: “Okay, isn’t there something terribly arrogant about us men particularly deciding in the case of women that they have to carry to full termination a baby within their womb irrespective of the consequences to them throughout the rest of their lives of doing so. Isn’t there terrible arrogance in that, involved in that?”

Browne: “You’re not dealing with the point I’m making, Peter.”

Browne: “Yes of course you’re not the way I want you to because, you’re not answering the question.”

Browne: “I think that maybe you haven’t listened. If in the case I have postulated to you somebody else was to say that oh no under no circumstances can your daughter take decisions for herself in circumstances such as that, wouldn’t you be appalled.”

Mathews: “I’m saying Vincent, that the reality is that expectant mothers and fathers, their partners or husbands do make those decisions for themselves, the same way for instance, hold on, men, men, well, men….”

Browne: “But they don’t. Sure the law has intervened they make criminals over them.”

Mathews: “Look, Vincent, men went down the mines and ways, men went into the mines and ways to provide for their family and their health was impaired and they died young. Look, for goodness, life is tough…. Vincent you know that, the ‘The Road Less Travelled’. ‘Life is tough’ that’s the first sentence of it And it was written by a psychiatrist in 1957.”

Browne: “Ah well, it must be true then.”

Mathews: “Yeah. There was, the question of judgment about when the risk to life of the mother arose seemed to have got mistimed.”

Mathews: “Oh I know, your interview with Peter Boylan.”

Kennedy: “Who was very explicit, about this.”

Browne: “Now, wasn’t it terrible, wasn’t there something wrong that this woman knew that the, her baby was going to die, she was, a baby she desperately wanted and was not going to survive without the womb, and she intuitively wanted to end the pregnancy there and then and had it happened her life would have been saved, isn’t there something terribly wrong, that our law wouldn’t…”

Browne: “And isn’t it terrible, awful that our law doesn’t permit that to happen.”

Mathews: “I don’t believe it was our law, no, Vincent. I think it was a misjudgment, a medical misjudgment.”

Mathews: “Vincent was talking about health.”

McInerney: “When they asked for an intervention they were talking about health.

Mathews: “When you’ve a man and a woman and you provide for the family, your health for different people at different times, is going to take a toll. That’s human life.”

Kennedy: “So you think it’s an acceptable risk for woman to be allowed to continue with a pregnancy even if that pregnancy would damage her health. You think that’s acceptable?”

Mathews: “But sure we’re all going to end up dead anyway.”

Kennedy: “Do you think that’s an acceptable risk? And do you think you get to make that decision for a woman? It’s not your decision to make. It’s the decision of the individual woman.”

Mathews: “Sinead, I have a responsibility to uphold the Constitution which is in plain English, elucidated by the Supreme Court in 1992, with a reference to include suicide for that specific case which is now not relevant given the evidence.”