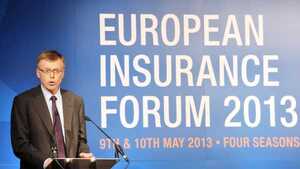 Mathew Elderfield is leaving the Central Bank for Lloyds, where he will be the bank’s director of conduct and compliance in October.

He spoke at the European Insurance Forum in Dublin earlier today.

“Mr Elderfield said the €64 billion recapitalisation of the banks is a “staggering 1,409 times” the current annual costs of banking supervision.

“Mr Elderfield also referred to remarks by former Anglo Irish Bank chairman Sean FitzPatrick who said prior to the banking crash in 2007 that “the tide of regulation had gone far enough.”

“Mr Elderfield referred to Mr Fitzpatrick as a “banker” without naming him in his speech today.

“I would hope that debates on regulation and supervision are done transparently and that they are given short shrift if they take place as a vaguely articulated concern about burden and competitiveness without being grounded in specifics to ensure an informed debate on policy,” he told the conference.

“He also stressed the importance of ensuring independence of regulation is preserved.

“This does not mean immunity from feed back or accountability. But it does involve being truly independent in its supervisory decision making from industry or political intervention,” he added.”