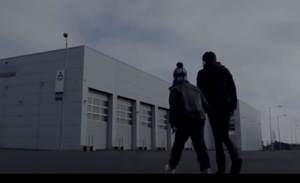 You guys were awesome enough a few months ago to share a trailer for my short film “Bound” and the interest really soared in the film. I just won best short film at the Fingal Film Festival [Wednesday] night with this new short called “Is This It?”

I would also love to tell people about a short film night I have recently taken over at the Lighthouse Cinema in Smithfield. It’s all for charity and the past couple of times we have held it we raised over 1500 euro for The Capuchin Day Centre for the Homeless.