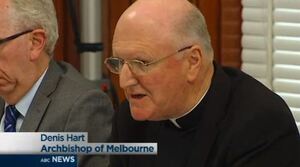 “Victoria’s most senior Catholic has told a parliamentary inquiry into child sex abuse the church was too slow to act in the past when dealing with paedophile priests.”

“The Archbishop of Melbourne, Denis Hart, is giving evidence at the inquiry, which is investigating the church’s response to allegations of abuse.Archbishop Hart admitted that in one case it took the church 18 years to de-frock a paedophile priest.”

“But he said ‘it was better late than never’. He said he and the church wish they could have acted earlier.”

“He also acknowledged that one of his predecessors, Archbishop Frank Little, had kept information about two paedophile priests secret and moved them to other parishes.”

Have You Ever Been Doored?