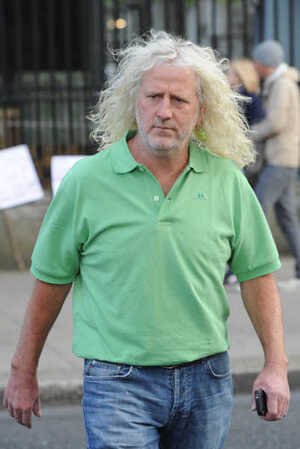 Independent TD Mick Wallace, above, spoke to Pat Kenny earlier this morning about claims made by Justice Minister Alan Shatter that Mr Wallace had been on his mobile phone when he was stopped and advised by Gardaí that he could receive a fixed ticket charge and penalty points, before being warned not to do it again.

Mr Wallace told Mr Kenny he was shocked and thrown by the claims.

He said he genuinely couldn’t recall the incident and even thought Mr Shatter had made it up.

He said he then got a text from a journalist on Saturday, in which he was asked:

“Were you stopped and warned at the Five Lamps on the North Circular Road?”

He told Pat he then did eventually recall an incident involving the Gardai but he was neither stopped nor warned:

Mick Wallace: “I was parked at the lights and a Garda vehicle came up beside me. And I was on the phone…which I know, I was wrong, I shouldn’t have been on it. The guard..I rolled down the window, the guard rolled down his window. There was two guards there. And I said ‘oh’, I just had my hand up and they said ‘it’s OK’. And, left it at that. And we just, we made small talk after for maybe about 15/20 seconds and the lights went green and I drove on straight and they pulled out. The guards were friendly.”

Pat Kenny: “And did you apologise to them at the time, when you rolled down the windows ‘sorry, guard, I’m on the phone here.”

Wallace: “Yes, I would have done, I stopped being on the phone and I said ‘look, sorry guard’. And they said ‘it’s OK’. And we went on to talk about something else.”

Alan Shatter is to speak – possibly creepily – about all of this at midday.

How Did He Know?

The Right To Silence