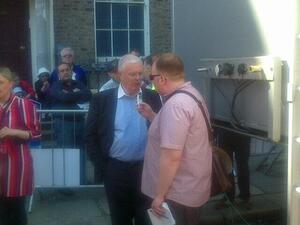 Peter Mathews at the pro-life rally in Merrion Square, Dublin,  on Saturday.

Dublin South TD Peter Mathews told the Irish Independent: “I will do what I have to do and that is vote against the bill.”

…He made his pledge after Taoiseach Enda Kenny rejected a call from Diarmuid Martin, the Archbishop of Dublin, for TDs to be given a free vote on the contentious proposals.

Fianna Fail leader Micheal Martin has given his TDs a free vote, although this was against his original wishes and was granted largely to avoid a damaging split in his parliamentary party.