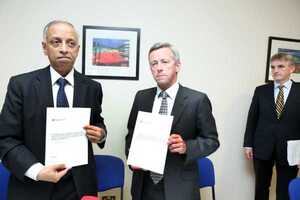 (From left: Sir Sabaratnam Arulkumaran, Dr Philip Crowley and Dr Patrick Nash at today’s publication of the HSE report into the death of Savita Halappanavar)

Professor Sabaratnam Arulkumaran [who chaired the  review team] believes legislative factors affected medical considerations in the case….and  said this resulted in a failure to offer all options to the patient.
Prof Arulkumaran said that if it was his case, he would have terminated the pregnancy.
He said it is possible she [Savita] would still be alive today had her treatment been different.

Praveen Halappanavar’s solicitor has said there is a strong likelihood that his client will take legal action in an effort to ascertain exactly why his wife died.

Gerard O’Donnell said the HSE clinical review went some way towards answering that question but that a number of issues were still outstanding.

He said there is still no clarity on why there was no medical intervention on the Monday or Tuesday that Savita Halappanavar was in Galway University Hospital.