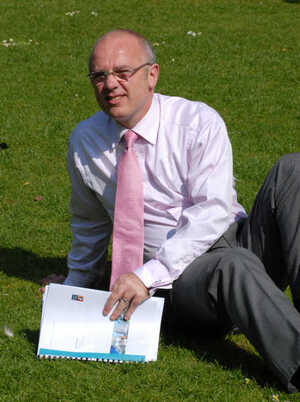 If he’s going down.

If the public are to be offered selected excerpts which tell a one-sided story of conversations in the banks during the crisis, to suit an agenda set by an unknown special interest, then they should be afforded the opportunity to hear all of them, from all of the banks, along with those of government officials, the Regulator and the Central Bank.

Anything less just prolongs the proliferation of inaccurate accounts of the circumstances surrounding the Governments decision in September 2008.

I believe that the Irish public will see a very different picture when the full story is told, having being denied a full account of the precise circumstances for so long.

…There exists a vast portfolio of documents, meeting notes and correspondence between the Financial Regulator, the Central Bank, the Department of Finance, the Department of the Taoiseach, European officials and politicians, Allied Irish Bank, Bank of Ireland, Irish Nationwide Building Society and Anglo Irish Bank in September 2008 and leading up to the issuance of the blanket guarantee on September 29, 2008.

If this was made public this misrepresentation and misleading of the Irish public could finally come to an end.

Oh, It’s All Coming Out Now