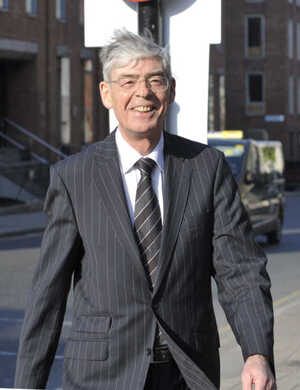 As part of the State bank guarantee in 2008, the then Fianna Fáil/Green coalition was entitled to appoint two new ‘public interest’ directors to the boards of the six banks covered by the guarantee.

Former Fine Gael leader Alan Dukes and Frank Daly were appointed to the board of Anglo Irish Bank in December 2008. Mr Dukes was subsequently appointed chairman of IBRC, until it was liquidated in February of this year.

In Saturday’s instalment of the Anglo Tapes, which are from December 2008, Paul Williams, of the Irish Independent, told how then Taoiseach Brian Cowen and the late Finance Minister Brian Lenihan ignored advice from international bankers Merrill Lynch (which were advising the Government) to shut down Anglo.

“Mr Drumm reveals a conversation he’s apparently had with former Fine Gael leader and ex-finance minister Alan Dukes – the government-appointed member of the board of the bank, where the former politician allegedly reported that the Government had decided to keep the bank going. Mr Dukes was appointed as public-interest director at Anglo days beforehand. The tapes put a new perspective on the political and banking situation before Mr Drumm was sacked and a number of months before Anglo was nationalised at a cost of €30bn. Up until now, it has never been known that Merrill Lynch went so far in urging the government to close Anglo.
“Drumm explains his plans to burn his own bondholders, which he says would have saved the Irish taxpayer €9bn – but was never implemented.”

In The FitzPatrick Tapes (Penguin, 2011), Tom Lyons and Brian, Carey write how, in February 2009, as the 2008 annual reports for Anglo Irish Bank were to be published, the Department of Finance warned Anglo’s chairman Donal O’Connor (who succeeded Sean FitzPatrick) and his board, which included Mr Dukes, not to refer to the need for emergency funding. 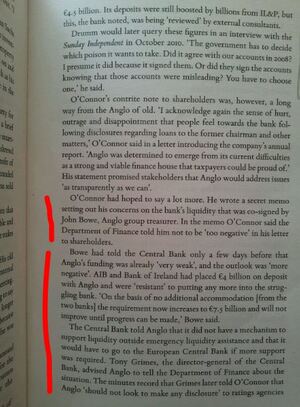 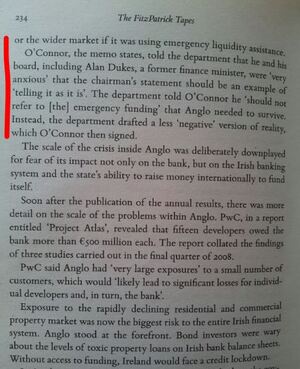 It states that the Department of Finance drew up a ‘less negative’ version of events which Mr O’Connor signed.

In August 2009, Mr Lenihan appointed Mike Aynsley as the new CEO of Anglo Irish Bank and Mr O’Connor stepped down to be replaced by Mr Dukes.

Last Tuesday, Alan Dukes was in America when he spoke to the Irish Daily Mail:

He told the paper: “I am away. I haven’t heard the tapes. I don’t know what’s in them. And in any case I wouldn’t comment about them, because the issues they were talking about are relevant to court cases going on at the moment.”

“I am not making any comment about it, full stop. Paragraph. End of story.”

Last Friday Mr Dukes’ former party colleague Taoiseach and Fine Gael leader Enda Kenny spoke about the Anglo Tapes while he was in Brussels for an EU summit.

During a Press conference, he branded the tapes a “thunderbolt”.

Earlier in the week, the Irish Independent reported that Finance Minister Michael Noonan, also of Fine Gael, knew nothing about the tapes until he opened the paper last Monday.