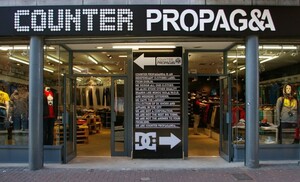 Bring yer own (to be on the safe side).

It is damn hipster garment shop Counter Propaganda on Liffey Street, Dublin, after all.

I just wanted to let you know about an event we’re having in our Liffey Street store on Tuesday, 2nd July. Its called Counter Art and is basically an exhibition of the best street art in Ireland. It will be on from 5pm up until 10pm that night. We plan on taking all the clothes out of the store and giving over our wall space for a pop up street art exhibition.

We’ve confirmed a really strong line up of some of the best street artists in Ireland including Fink, Solus, DMC, Kin, Visual Waste, MarcaMix, Kevin Bohan, AW2F, Mels2, Thiago Ritual and Meep to name a few.
Irish Hip-Hop Producer/DJ – Calzone Kelly (he’s launching his first EP later in the summer) will provide the beats on the night. All welcome.

There May Be Qué?