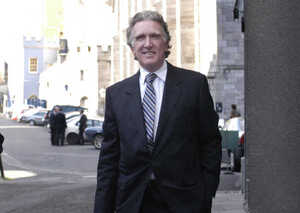 On September 17, 2008, the Irish Times gave Noel Smyth (above) space to to publish a 1300-word article about the bank crisis and what the government should do.

Noel was described as a ‘solicitor and property developer‘.

What wasn’t mentioned was that Noel was also a big customer with Anglo Irish bank and Irish Nationwide.

And by ‘big’ we do mean ‘at the time he wrote this article (below) he owed both institutions hundreds of millions in property bets gone bad’.

This is what he had to say. It’s quite magnificent.

One of the main features of property ownership in Ireland is that it is mostly in the hands of people who either live or work in our country. We have been unable to expand this ownership base like those in London, New York or Paris have, or to introduce incentives like those given to people buying property in Dubai.

In the present climate (where property is nearly a dirty word and where there is an I-told-you-so attitude from some of the more smug, negative commentators who, with respect, have never taken a risk in their life, never given anybody a job and certainly have never promoted Ireland Inc as a place to invest) there are steps that Ireland Inc and those of us in the property world can take to improve our profile and our ability to get investment into our country. Our main attribute is, and always has been, our people. We have the best brains and the most enthusiastic professionals, be they agents, surveyors, solicitors, accountants or bankers, all of whom are needed to identify, secure, acquire, finance and deliver projects.

When the smoking ban was introduced there was an outcry, saying that it would never work. We know the result to be different.

We have to take a similar step as far as finance is concerned. We don’t have control of the ECB interest rate but we do control fiscal policies within our borders and we should not be afraid to use these to their fullest advantage.

If the Government was to persuade the Central Bank to guarantee all deposits in Irish banks operating under a banking licence from the Central Bank in the State, the effect would ensure that depositors considering investing in Ireland would know they had a State guarantee and that the banks would always ensure their money was repaid.

In the US, when Freddie Mac or Fannie Mae, the main mortgage providers, hit a hiccup in respect of the circa 2.5 million homes that are mortgaged a year, the US Federal Reserve indicated they were “working with and will not allow these institutions to go under”.

That is short of a guarantee and the hiccups continued until the US government seized control of the companies and started the healing process in the US housing market, which wil no doubt lead to better market conditions worldwide. A guarantee must always be unequivocal.

Equally, when Northern Rock hit difficulties in the UK, instead of immediately nationalising the bank, the UK Treasury dithered while confidence in the banking system evaporated.

None of our banks in Ireland are in the remotest area of trouble or of any concern. So surely now is the time to step in and confirm that all deposits made in our banks are fully guaranteed and not just limited to 90 per cent of €20,000 per account, which is the present position.

If deposits were guaranteed in such a way, there would be a huge influx of funds into our country so that the banks would then be able to free-up the demand for loans.

The vital three-month inter bank facilities would then return, trust and confidence between the banks would replace the present fear of illiquidity created by the credit crunch and the system, stagnating at present, would come back into full operation. People thinking of investing in Ireland could rely on the fact that the local banking system would make monies available to them for the purchase or investment in Irish companies and properties, and those institutions lending to Irish banks would know that the State stood behind the banks in question, thereby easing any credit crisis that has been brought on by the US credit crunch.

I have never been in favour of interfering with the market, as interference has shown previously – for example, through the two Bacon reports and other situations – that the market is best suited to look after and adjust itself.

However, the exception to the rule is for “genuine foreign investors” (to be defined by the Revenue and fiscal authorities) in Ireland to be given a specific provision vis-à-vis stamp duty.

We have the highest rate of stamp duty and those in a position to genuinely certify that they are a non-resident/foreign investor, should be given a stamp duty of circa 3 per cent.

VAT on fees and services for those purchasing property who fall into the category of “genuine foreign investors” should again be entitled to zero rate VAT.

Ireland has been able to attract a number of businesses in the general sphere of the IFSC, through the IDA and through our tax rate which runs to 2025.

Using the same criteria, with the low CGT base of 20 per cent and with the provision of good finance, huge investment would come into Ireland.

With the package of finance, stamp duty and VAT, and with the extraordinary abilities of our young property professionals and entrepreneurs, the market in Ireland could be turned around in jig time.

At a time when young planners, architects and engineers are being let go because of the downturn, the Government should lift its embargo on recruitment and encourage An Bord Pleanála to employ these bright young professionals. This would allow the board to meet its objectives of dealing with appeals it in a timely and efficient manner.

It would help developers no end, it would assuage the concerns of their bankers and would add to the ability of developers to write an accurate business plan, knowing the timings that are likely to affect, or be affected by, these decisions.

When we reduced our capital gains tax from 40 to 20 per cent, everybody said Charlie McCreevy had got it wrong, only to be proved that he was right. Were we to reduce our personal taxation to a flat 25 per cent across the board (and no exemption for non-residents), we would attract all of the top financial professionals currently setting up home in such places as Singapore and Dubai.

There would not only be an increased tax in favour of the Revenue, but it would also attract thousands of highly paid professionals creating new businesses and firmly putting Ireland at the head of the knowledge economy. This would clearly add to the demand for property and the back-up that these types of sustainable jobs would create. It would deliver us away from the boom and bust of property development, and instead add to our identity as a tax-friendly and vibrant economy.

It would also augment our corporation tax rate of 12.5 per cent which has also proved to be a huge success with major corporations, as has recently been proven by the number of companies transferring their asset management and other businesses to Ireland. These captains of industry and finance obviously believe our Government that our current tax regime is solely in our own hands no matter what the Lisbon Treaty says.

The knock-on effect of enticing this brain transit to Ireland will create a demand for further back-up jobs with the enticement for further property and development while increasing our fiscal base and improving our tax take from all the goods bought and sold, developments and associated commercial and fiscal activities.

Armed with these new changes, our young professionals will change the property and investment face of Ireland and will, in effect, bring home the bacon.

Noel’s property empire was taken over by Nama along with his art collection in 2011.

For The Night That Was In It