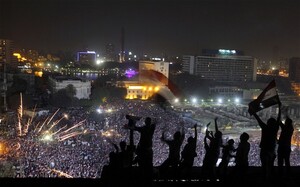 Those debates are largely academic; what happened could be said to meet the definition of a coup, as well as that of a revolution.

But even though both words might apply, neither is in itself enough to describe what happened: It was both a coup and a popular movement, both the expression and subversion of Egypt’s democratic experiment.

And although some academic literature finds that coups can be democratizing that doesn’t make them democratic.

Is what happened in Egypt a coup or a revolution? It’s both (Washington Post)

Meanwhile, At The Crossroads Of The World