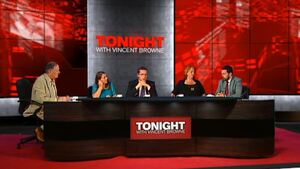 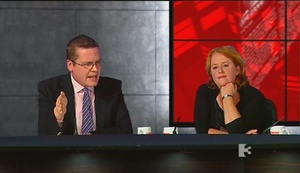 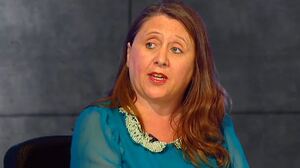 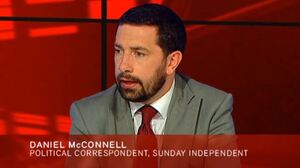 We pick it up from the 28:25 mark and the criminalisation aspect to the Protection of Life During Pregnancy Bill.

Later, Mary Coughlan asks John McGuirk as to what pro-life people want women who are contemplating having a termination should do?

Daniel McConnell: “I mean this is the fundamental problem with the pro life side in my view is that they seem to have no problem whatsoever with people going over to England and dealing…or people going across the border. They seem to traditionally have liked to bury their head in the sand and think that no issue has existed.”

Vincent Browne: “I don’t think that’s fair, Daniel. They’re are a lot of pro-life people deeply regret the fact this happens but don’t see a way of stopping it.”

John McGuirk: “Vincent, can I say something?”

McConnell: “No, Vincent we might come from different points of view. This is an issue I have studied at length and ah we have seen a pro-life campaign dogged and kind of shredded in religious dogma and I think what I’ve sought from the get-go from Savita’s death is that we park everyone’s ideology at the door and let medical fact and evidence you know be at the core of any discussion we’ve had. But I’ve been very alarmed by a lot of the noises from the pro-life side and I’m not either one or the other. I’ve very particular views on this but I’m alarmed at the number of people who seem to think it’s no problem for people to go over to England and deal with this, as long as it’s just not on our own doorstep. And I think Billy Kelleher raised a very interesting and very very pertinent point there this evening, I mean what happens when a 14 year old girl you know, with the access to the internet ah and can go off to get this stuff, does she not run the risk of not dobbing her doctor in or, or getting herself into trouble for fear of criminal prosecution?”

McGuirk: “It’s the worst provision in the bill. It’s one of the, if not the worst provisions in the bill and it is in there and it is specifically in there and Labour TD’s have been telling their people this everytime they’re asked to placate the pro-life side because that’s what they think we want. They think we want to lock women up. It is an absolutely..every word that Billy Kelleher said there is accurate. That is a provision in the treaty, in this bill that is designed first of all Enda who genuinely thinks his backbenchers are, by the way the people wo are putting down amendmenents tonight are Colm Keaveney, he’s pro-life and voting no to the bill. Lucinda Creighton who’s pro-life and voting no to the bill. They’re the people voting for this and it’s the Labour pro-choice people who are voting to keep it in the bill and that is utterly wrong. It should not be in the bill, it should never be in the bill. In relation to the point that you made about pro-lifers being happy about people to go abroad, I regard abortion and I think nearly everyone who is pro-life is a grave wrong and something I do not want to see happen in Irish hospitals, performed by Irish doctors, happen in this country because I think we have principles as a nation and we should defend. I do not think it is practicable for me or anyone else to stand at the gates of Dublin airport and interrogate women for the reasons they’re travelling abroad anymore than it would be to interrogate a student travelling to Holland, “Are you going to smoke drugs do you know that’s illegal here?”. Or a guy travelling to Thailand to pursue whatever activities that are legal there but may not be legal here.”

McConnell: “But John just because people are travelling to England doesn’t mean the problem doesn’t exist, it just means that we’re exporting it.”

Mary Coughlan: “It’s a problem that exists now and has done for many many years. What is it that you would have us do?”

Coughlan: “What is it you would have us do?”

Coughlan: “What is it you would have me do?”

McGuirk: “Well I, well I…what I’d have you do right now is…”

McGuirk: “What I’d have you do right now is, let me answer the question, which is this. Em, what I would have us do in this country which is something by the way, for a debate that is so divisive Mary, I think that if you and I can agree on nothing else this evening we should be able to agree on the fact and Louise as well, that the services that we provide to women in a crisis pregnancy in this country are not good enough. That the supports we provide to people who have pregnancies where and by the way, I’m not taking about fatal foetal abnormalities here. I’m just talking about foetal abnormalities, people who are carrying children with Down’s Syndrome or very serious issues because a lot of the abortions that happen in the UK these days happen because a child has an abnormality that is not necessarily fatal but may cause problems.”

Coughlan: “I don’t know anything about that.”

Louise Bayliss: “Do you have statistics on that because I’m not sure that’s true?

Coughlan: “I’m not sure either.”

Bayliss: “I have never heard of a woman travelling to have an abortion because she found out she had a disabled child or a special needs child. The only reason a woman travels to the UK to have a child is because it’s not wanted for whatever reason, a violation of her body or whatever, financial. I have never in my life heard a woman say…”

Bayliss: “How many..? We’re talking about in Ireland. How many women get on the boat in Ireland?”

Coughlan: “How do you know that?”

Coughlan: “Do you know another fact?”

Coughlan: “Do you know another fact? That people of mixed race and people of a bigger gene pool and the gene pools are getting bigger and bigger.”

Browne: “I’m sorry, I’m sorry John we want to go over to the Dail Lucinda Creighton is speaking.”

Luci In Disguise With Diehards