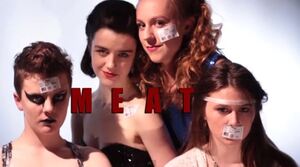 “‘Meat’ is set in an upmarket brothel run by Demo, a gifted hawker and collector of beauty. The exquisite specimens in his menagerie are Anezka, glamorous courtesan with a flair for the esoteric, Shóna, hard-bitten veteran of the street trade, and Miriam, whose speciality is everything. Enter Free, a young mother desperate to make money for the sake of her son and a radical new element in Demo’s masterfully composed concoction.”

“Meat” opens TONIGHT and runs until Saturday, July 20th, in the new Cube Theatre, as part of the Galway Fringe Festival. Tickets can be bought at the door.

What Joker Did This?