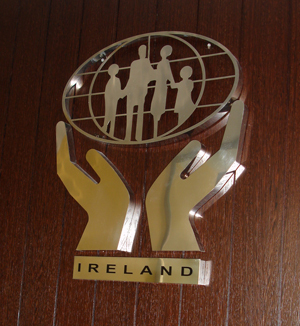 On the future of Newbridge Credit Union, the country’s largest credit union

We became lab rats in their experiment, a training ground for bank auditors who never set foot inside a credit union before. Regrettably when small people come up against the big guns, the Central Bank, Regulator, Department of Finance, Arthur Cox etc, their voices are rarely heard. We were caught between a rock and a hard place wanting to scream about the injustice of it all but fearing that if we spoke out they would come down on the credit union like a ton of bricks.

We have learned that their power is absolute. If we were allowed we could explain how the board was manoeuvred down a cul-de -sac where we were ambushed by new legislation that was never meant to be used against credit unions. We could also show our figures, how not one penny of members money was lost in investments or otherwise and how we managed to bring in a surplus every year since the recession began and how members, struggling to survive, are still trying their best to repay loans.

But the story of Newbridge Credit Union is not just about savings, loans and dividends: There is no doubt that it helped bring prosperity to the town in the last 44 years but there was a hidden added value to it as well. Through Bursaries, Donations and Sponsorships we continued to support many local groups, schools, clubs and organisations in the town and beyond. Up to €250,000, in sponsorship, was spent in the locality in the three years before the special manager was appointed. All of this will be lost if their plans come to fruition.

Only the loyalty of our members, built up over forty four years, prevented a major run on our credit union last year. I would like to think that those members who benefited from loans and good dividends over the years will keep faith with the volunteers and staff as they work hard behind the scenes, despite the unenviable situation. Because if Newbridge Credit Union disappears you will be left to the tender mercies of the banks…
…I am writing this to give you an idea of what is going on in Newbridge Credit Union. What I would really love to do is shout from the rooftops about what really happened here and would willingly do the jail time, but unfortunately I cannot plunge my family into debt of €100,000, we just cannot afford it.

Part of a letter to members of Newbridge Credit Union from former volunteer director Breda Reid.

a very honest and heartfelt letter from Newbridge credit union volunteer director as the (loan) sharks move in to get at ordinary peoples savings. This is the fallout from the Credit Union being told to stay where it was as Anglo burned. 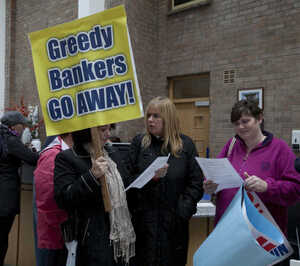