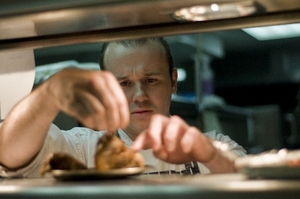 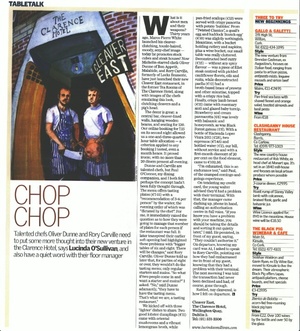 (Chef Oliver Dunne, top, Michelin-starred co-proprietor of Bon Appetit in Malahide, Co Dublin, and now Cleaver East in The Clarence Hotel, and Lucinda O’Sullivan, above, food critic of the Sunday Independent and, bottom, the review of Cleaver East in yesterday’s Life magazine)

In an open letter on his blog Mr Dunne writes:

On reflection of your [Lucinda O’Sullivan’s] review [Not available online] which wasn’t that bad (because everything you got was perfect as you were spotted the second you walked in) I wondered why you would write such a nothing review on one of the best restaurants that’s opened in Ireland for years.

…Cleaver East has already after just four weeks got the nation talking positively about it and is being applauded by nearly every single person who has crossed its doors since the opening night critics, celebrities and most importantly the public. Here are four reasons I have come up with why you would do such a thing;

1. You took offence to the fact that I mentioned you on Newstalk when I pulled out of the annual restaurant awards for best chef a few years back as a result of you being the food critic and you had not been in my restaurant for 3 years.

2. You sell plaques to restaurants to promote your own personal guide book whom you profit off and I have voiced my opinion that they are a worthless waste of money….

Chefs and limelight are a recipe for trouble (Lucinda O’Sullivan, Sunday Independent)