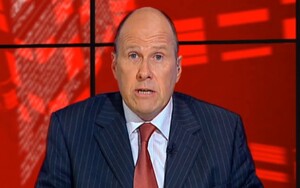 “AIB Boss, David Duffy got a grilling today from TDs in the Oireachtas Committe on Finance. He will be followed tomorrow and later in the week by bosses from Bank of Ireland, Ulster Bank and Permanent TSB. Tonight, we’ll be asking if banks are doing enough to tackle Ireland’s mortage arrears problems. We’ll also look ahead to the new Personal Insolvency Arrangement due to begin next week. Will they work for debtors, or will the banks still hold the balance of power?

Before we start, I’d just like to say, given the particular topic we’re covering, I feel I should bring something to the attention of viewers. Many of you will be aware that I have had a personal history with AIB, arising out of my recent bankruptcy. I have declared strong views about my relatiionship with AIB which have featured in the media recently. I wish to make it absolutely clear that these views will in no way prohibit me from presenting tonight’s show in a fair, objective and impartial manner, as required by The Code of Broadcasting Authority of Ireland and TV3’s editorial policy. I want to assure viewers that my own views will not impede me from carrying out a fair and balanced debate on the issue.”

The Man Who Couldn’t Keep Quiet