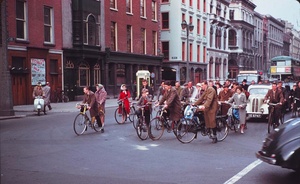 ( Cyclists on the corner of Dame Street and South Great Georges Street, Dublin,1960, including young tyke on phone)

Bike thieves, over-zealous policing, the bike lanes to nowhere and getting called “the spawn of the devil”.

Banter is hosting ‘On Yer Bike’ a FREE and timely debate next Wednesday on why Dublin treats cyclists as if they were circus freaks.

Despite the huge take-up of the Dublin Bikes scheme and the increased number of cyclists on the streets (streets, as opposed to footpaths) thanks to the Cycle to Work scheme and other iniviatives, cycling continues to be seen as a minority interest. Are cyclists really the villains some paint them to be or are we overlooking what pedal power can do for transforming the city?

Banter’s On Your Bike , September 25, Twisted Pepper (Middle Abbey St., Dublin 1). Doors open 7.30pm Admission is free and the sign-up form for the night is here.

Meanwhile, In The Cycle Lane