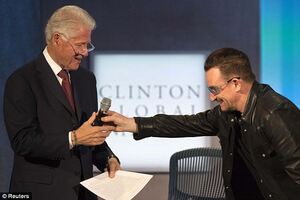 Bono and Bill Clinton in New York on Wednesday.

Further to Bono’s wide-ranging interview in the Observer last Sunday.

The interview with Bono by Tim Adams was blessed, or cursed, with interesting timing. Within a couple of days of the piece appearing, with its headline quoting Bono’s defensive “There’s a difference between cosying up to power and being close to power”, Bono was literally jumping into Bill Clinton’s seat at a Clinton Global Initiative conference to offer his loving imitation of the ex-president’s voice. (Bono’s version of Clinton was, by happy coincidence, flattering Bono.) You gotta admit, it looks pretty cosy.

The scene was all the more ironic because Adams’ interview, and Bono’s answers, rested heavily on the proposition that the mega-rich rock star, whose access to the world’s media is as unobstructed as his route to its corridors of power, is nonetheless a beleaguered and misunderstood figure, fighting to have his ideas heard and his Bono-fides respected in a hostile world. In the Bono-Adams parallel universe, the singer is under attack not merely by lefties, but even by liberals.

Previously: “U2 Is In Total Harmony With Our Government’s Philosophy”