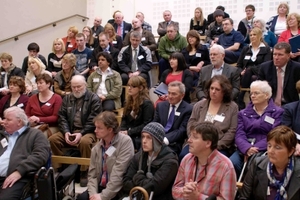 (Members of the Neurological Alliance of Ireland, at a briefing for TDs and Senators in the AV Room of Leinster House last year)

I’m not sure if you’ve picked up on it already but the Dáil Committee on Procedure and Privileges (Dáil Éireann) has apparently decided to stop allowing civil society groups from briefing legislators in the AV room.
This is used by civil society groups to brief Oireachtas members on proposed legislation or other topical issues, to share their expertise and experience as well as raising issues of concern or providing answers to questions members may have in advance of Dáil/Seanad/Committee debates.
The Seanad also has a Committee on Procedure and Privileges but it is not bound by this decision and has apparently called for a joint discussion later in the month.
The AV room is a valuable resource given that TDs and Senators can attend briefings without leaving Leinster House but can leave quickly for a vote without huge time pressure. There is no cost to the NGO involved so it’s beneficial for both sides.
In the context of proposed Dáil reforms where we’ve been told that the Government will engage more with civil society in relation to proposed legislation, it seems strange to take such a stance.

Make This The Public Square