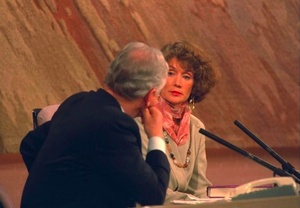 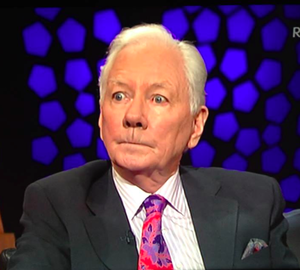 Gay Byrne returned to  the Late Late Show last night to promote the charity book of his Meaning of Life God slot series.

He was also asked about the unusually hostile interview he conducted with Annie Murphy in 1993 following the publication of her book ‘Forbidden Fruit: The True Story of My Secret Love for the Bishop of Galway’.

Ryan Tubridy: “If we’re taking about the church and the meaning of life and that Catholic Church and the Late Late Show and everything that goes in it, and I mention the Annie Murphy interview, what do you say?”

Gay Byrne: “Well, if 25 million people gather round you and say “Gay we don’t think you should drive home tonight” the best thing you can do is hand over the keys. And apparently there is a general consensus that it was a lousy interview.”

Tubridy: “And how do you feel about it?”

Byrne: “My answer is I feel they’re wrong. I think they’re wrong but nonetheless that’s the way it is. The only answer you can give to that is well what do you think of the other 40 years of the Late Late Show. If the only one you remember is something you didn’t like about Annie Murphy, well it was a very tricky time at that time…”
“Eamon Casey had made a run for it. He made major mistakes. Firstly he denied his son. Secondly he made a run for it to get away. Thirdly, he dipped into diocesan funds which was really unforgivable and fourthly he denied all knowledge and so on and I think that people were very strongly against him on that occasion and also very anti the Catholic Church on that occasion through him and the abuse thing was just starting to emerge, all that was going on..
“So he was a devil incarnate as far as people was concerned and she was a… a saint and you couldn’t criticise her and they took out completely the wrong meaning from my remark at the interview, totally the wrong meaning.”

Tubridy: “And why was it wrong?”

Gay: “Because its a very old expression in Ireland ‘well if he’s half the man his father is he’ll be alright’, that sort of thing and in my head at that moment what I was thinking of, which you never ever see, which was the description that she made of Eamon Casey when she first fell in love with him because she described that any bishop of the Catholic church that she had encountered was a pale faced ascetic rather frowning rather serious person whereas this man she met as bishop of the Catholic Church was big, smoking a cigar, brandy, trying to stop him singing at the party, dancing with the girls at the party, all that larger than life thing and she fell for him there and then and that was the image I had in my mind when I made the remark.”

Tubridy: “You know her son has said during the Summer, her son, yes, said he would have leapt across the deck and decked you…”

Byrne: “Yes, but funnily enough he then said that in the years intervening between that remark and growing up as it were he had met his father on several occasions and he had come to understand how his mother had fallen in love with him and he came to recognise the great good characters of his father. That’s what he said that having met him on various occasions throughout the years that he had changed his mind about his father. When he made the remark about me, it’s not surprising, he was a young fellow, his father had dumped his mother and done all of that, that sort of thing so he got very angry…” 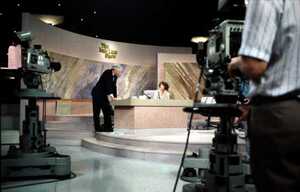 “If Peter is half the man his father is, he’ll be doing well.”

[Annie Murphy] recalls her reaction. “I simply replied, ‘Well, Mr Byrne, I’m not half bad myself’. Then I said good day and left the set. There was nothing more to say after that, we couldn’t get nasty on public television.

“Also, it meant I got to have the last word, which I wanted. After the show, Mr Byrne apologised for being hard on me, but it didn’t matter — I wasn’t angry.

“I told him I had nothing more to say to him — there was no problem, we had both won. I think Mr Byrne had read the book and thought it was over the top. Also, he liked Eamon Casey,” she adds.