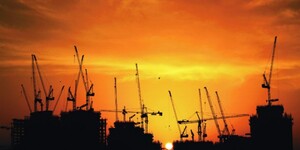 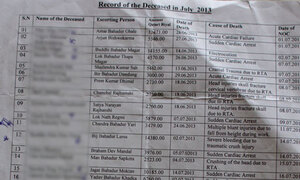 In late September The Guardian revealed disturbing details of how at least 44 Nepalese workers died between 4 June and 8 August – a rate of almost one per day – as the labourers worked on projects during a ‘building binge’ ahead of the 2022 World Cup, above.

The Guardian reported that thousands of Nepalese, who are the single largest group of labourers in Qatar, face exploitation and abuses that amount to modern-day slavery, as defined by the Irish Labour Organisation.

It told how the labourers face working in 5O degree heat with no access to drinking water; how men throughout the Qatari construction industry are sleeping 12 to a room in places and getting sick because of the conditions in filthy hostels; and that some are forced to work without food and are forced to beg for food.

In light of this, Shane Darcy asks: Is there an Irish link to this story?

“The Irish Congress of Trade Unions has called on the FAI to ensure FIFA insists that the rights of workers are respected in the run-up to Qatar 2022. Attention should not be focused only on the role of the footballing associations in this scandal.

There has been a significant interest from Irish companies in the lucrative construction contracts being offered ahead of Qatar 2022. Deloitte estimates that around $200 billion will be spent on construction for the World Cup in oil-rich Qatar.”

“With the construction industry experiencing a sharp decline in Ireland in recent years, many companies have been looking overseas for business opportunities, including in the Middle East. Enterprise Ireland and the Department of Foreign Affairs and Trade have actively encouraged this. Minister Jan O’Sullivan commented on her return from a 2011 visit to Saudi Arabia and Qatar:

Major infrastructure and development projects currently underway and planned, including the world cup 2022 in Qatar, all hold the potential for Irish companies to win more business.

“Mercury Engineering has already been successful in this regard. RTE Sport reported in 2010 that that Dublin-based company “played a key role in Qatar’s success in winning the bid to host the World Cup in 2022″. The firm was contracted to supply a cooling and air conditioning system for a showcase stadium which featured in Qatar’s bid.

The company’s Managing Director, Michael Kennedy, recounted that a team of 160 skilled workers completed this task in 10 weeks. It has also been reported that “labourers and engineers worked through the nights while concerned members of the royal family, including Sheikh Mohammed bin Hamad Al Thani, the emir’s son who headed the bid committee, checked on progress with unannounced visits”. Kennedy has explained the company’s ambitions in the area:

The team did an excellent job on this prototype stadium and we are now looking forward to playing a key role in the construction of the various stadia and other projects in the run up to the 2022 World Cup.

“An Irish Qatari Business Council has been established to foster greater business and trade relationships, and many Irish companies have showcased their wares at Project Qatar.”

Full article: Qatar 2022 and forced labour: Is there an Irish connection? (Business and Human Rights in Ireland)