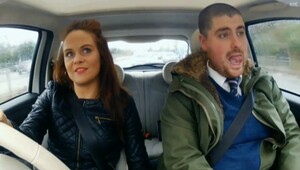 (Joanne McNally and Greg Spring, top, as Suzanne and Craig)

The Commute is a new half-hour comedy from Dave Coffey (Dan & Becs) about three couples living on the edge of Dublin’s commuter belt.
All the action takes place in the cars of the three featured couples as they travel to and from work every day.
Suzanne (Joanne McNally) and Craig (Greg Spring) Fergal (Chris Tordoff) and Niamh (Áine McKevitt) and Johnny (Eric Lalor) and Jenny’s (Eva-Jane Gaffney).