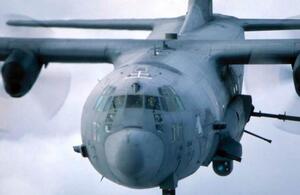 ( The AC-130, which the Americans are using for “special operations” in southern Afghanistan. One like it landed in Shannon)

Mr  [Eamon] Gilmore said he was aware that a US plane armed with a fixed weapon landed at Shannon Airport in the period prior to September 2013.

He said the case was raised at the highest possible level with the US Embassy.

An official there said it was an isolated incident that had taken place as a result of an administrative error, he said.

The minister said assurances were given that steps had been taken to prevent any recurrence.

Armed US plane landed at Shannon Airport without permission (RTE)