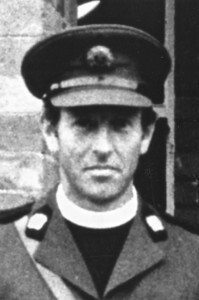 There will be no public inquiry into the 1985 death of Fr Niall Molloy [above] despite earlier calls by the highly regarded Garda cold case team, the Irish Daily Mail can reveal.

…recently the Garda Serious Crime Review Team recommended a public inquiry into the killing, according to Department of Justice sources.
…However, following consultation between Justice Minister Alan Shatter, the Garda Commissioner and the Cold Case Team, this recommendation has been changed.
….The Mail understands that gardaí believe there were two possible reasons Fr Molloy was killed. The fallout over money was one factor, while another motive may have been resentment. It is understood that the priest had formed a close relationship with a female close to one of the suspects in the case.
Gardaí believe that two people may have been involved in the killing and others at the party were aware of it.
Cold case officers were ‘very surprised’ that a guest list was not provided to investigating detectives, while some of those who attended refused to co-operate later with the cold case investigation.

Speaking to Shannonside news nephew of the late Fr Molloy Bill Maher says the family have not been officially informed of this but they’re disgusted if it is true.