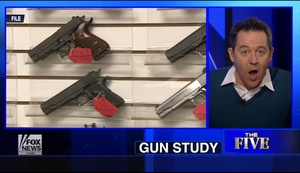 Interesting study creating a lot of fuss in the American right wing press at the moment, showing once and for all that white Americans with racist attitudes ARE more likely to own guns and oppose gun control. Fox News (above) even had a (“fair and balanced”) 5 min rant about it.

Two of the researchers stirring up this hornets’ nest are Irish – Dermot Lynott (Lancaster University) and Michael Daly (University of Stirling). Kudos lads!