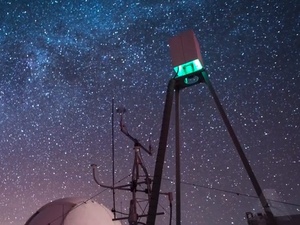 The Maui Space Surveillance Complex, which belongs to Air Force Space Command, is home to several telescopes that track objects orbiting the earth, such as satellites and space debris. The complex is located 10,000 feet above sea level on top of Haleakala [Hawaii], a dormant volcano on the island, that is also considered one of the best places on Earth to view space from. This time lapse sequence was captured over a three-day period by a team from Airman magazine, the U.S. Air Force’s official publication.

Bouncing Off An Asteroid

Black And White And Red All Over