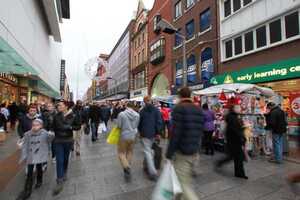 In its latest forecast,The Organisation for Economic Co-Operation and Development (OECD) said GDP growth will be just 0.1% this year and 1.9% next year.
Its projections show that unemployment will remain high at 13.2% in 2014.
The OECD said Ireland may miss its target of cutting the deficit to 3% of GDP in 2015 which has been a cornerstone of its recovery plans. The OECD predicted the deficit would be 3.1% in 2015.