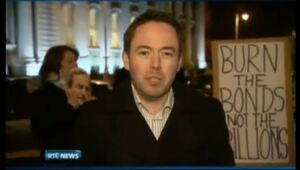 On the Six One News last night Bryan Dobson spoke to assistant professor in economics in Trinity College Dublin, Ronan Lyons, who is also the in-house economist at Daft.ie, about the ‘recovering’ property prices in Dublin.

Ronan Lyons: “Well, what’s going on now. I mean, really, prices can only rise for one of three reasons. Either it’s a bubble which is all about mortgage credit really. It’s about incomes going up, which I don’t think is happening on a wide scale at the moment. The last factor is a lack of supply. So, you can call that a price spike, when prices go up because there isn’t enough supply in the Dublin market which is what I think we’re seeing at the moment. That’s why prices are rising.”

Dobson: “So, in terms of where people are raising the money for these purchases, a lot of it is cash, isn’t it? Because the banks are still very slow to lend.”

Lyons: “Yeah, it’s tough to measure because we don’t have good figures on the proportion that are cash or mortgage-backed, based on the whole set of transactions. But what we do know is that the number of mortgages being approved and the number of mortgages being issued is going up and I think there were statistics out today that said the mortgages approved in the month just gone in October was the highest on, the highest on record, apart from I think the end of last year when there was mortgage interest relief. So mortgages are coming back and I think it’s all about sentiment really at the moment really, in the Dublin market. There’s a bit of momentum creeping back. So the backlog of people who didn’t buy between 2008 and 2012, they’re coming back into the market now.”

Dobson: “All right. And in terms of…we have some visitors there behind you but don’t let that distract you for a moment. [car beep sound] In terms, in terms of the investor, the investor involvement in this market, how, how important are they? I mean are they a big factor in this?”

Ronan Lyons: “Well, typically, you see investors, in the one and two-bed segment, where the yield, which is the relationship between prices and rents, that’s about 10 to 12 per cent and if you think about a 10 to 12 per cent return on your savings account, you know, that’s a high return. and that’s what they’re seeing in the smaller property segment. In the family home segment, that figure is may be only five or six per cent.”

Dobson: “Well I tell you what, Ronan. I’m gonna stop, I’m gonna stop that there because the idiots behind you are a bit of a distraction. So we’ll eh, we’ll try get rid of those and come back to you if you can. Otherwise, thanks very much.”

Watch the Six One News in full here and go to 23.30 for the above segment.

Here Is The News

Everything Must Go [Updated]