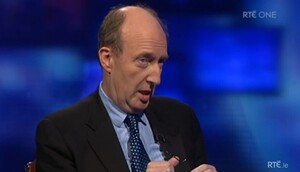 Miriam O’Callaghan: “What’s the significance of that latest information just mentioned there?

Shane Ross: “It’s absolutely staggering – I mean it was bad enough finding the €14 million yesterday where I brought it to the PAC, but I found this in the accounts of The Central Remedial Clinic Supporters, and the significance is this is, despite all their protestations in this extraordinary statement today that the majority of the funds goes towards development – the biggest item and biggest transfer from them to The Central Remedial Clinic last year, in 2012 was this €3 million figure – so, quite clearly, the interesting thing about this is they transferred €3 million to what they said – to top-up pension liabilities – without being specific – now that could be one person, it could be ten people, it could be 280 – we know nothing about it. But they have also made provision in the accounts suggesting that they don’t ever expect that money to be repaid.
“So this looks like it’s long term and and it’s interest free – it’s a staggeringly generous gesture – it’s a gift. And it’s a gift given to actually provide for the pensions of either one, or two hundred and fifty people, we don’t know – we’re going to know when they come before the PAC. But the significance of it is, those people who gave money to The Care Trust , who gave money to go to The CRC – did they think that it was going to top-up the pensions of people who were already being very well-paid?”

Ross: “I think that’s a good point – but what about that though is – I don’t think anyone would object if they said first of all, these guys are reasonably paid, they’re paid modest amounts, modest amounts of money – The Chief Executive is getting €106,000, originally – now getting €240,000, courtesy of the people who are giving money to the children.”

O’Callaghan: “Their own chief executive?”

Ross: “Yes, their own chief executive who is getting that. So the significance is that – look, this money is not going to the place where people intended it to go to. And the other thing is this, people forget The CRC, The Central Remedial Clinic – it gets €16 million, every year to start with – from the HSE, it’s getting a grant, €16 million as well. So what is this money for? – it’s at the discretion of the people in the Supporters Organisation which is supposedly a separate organisation – it’s getting extra money which it can do what it likes with. But the evidence in the latest account is that it’s using it for the staff, probably the well-paid staff , rather than using it for the children.”

O’Callaghan: “I suppose, but what about the wider issue? I met someone today, a woman who sends money monthly to a charity – a small amount because she doesn’t have much money, but she was very worried that the money she gives isn’t going to what she thought it was going for. Is it that charities in this State should be more clear about what the fund-raised monies go on – spell it out – and maybe we need a regulator for charities? ”

Ross: “Yeah, of course we do. It’s a very murky area – and it’s extremely shocking for people to find this kind of veil coming off charities – and that there are people in there who are obviously milking charities for their own good.
“I’ve got, as a TD today – I must say, having brought this to Public Accounts yesterday – and having talked about it on the radio – I’ve got absolutely jammed by complaints by people, the same situation as yourself – mostly women, funnily enough, saying – I work for them, I work for the Care Trust to help The CRC – I’ve sold tickets, I’ve done this, that and the other – or other people who’ve subscribed and say, ‘I’m never going to give another penny again, I thought it was going to help people with polio and now I feel it’s actually going to top-up rich people, people who are already rich’ – it’s a pretty shocking revelation.”

O’Callaghan: “And yet we must be careful, mustn’t we Shane, because charities still need funds, so we don’t want everyone to stop giving money to very well-run and very deserving charities?”

Ross: “No, that’s exactly why these accounts should be absolutely clear – we should know exactly how much the directors are paid, we should know how much their top-ups are worth and where every single penny is going. Now, The CRC is guilty of a lot of things, it’s also guilty of the fact that it constantly refused, before the internal audit, to give the amount that The Chief Executive was paid. And now we know why – because he was he was being paid such an extraordinary amount €7,500 a week.”

Previously: Did You Raise Money For Them?

A Message To The Board