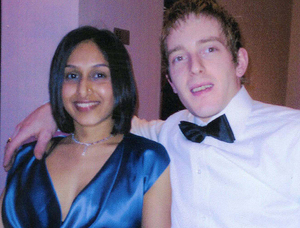 “The HSE has apologised to the family of a 29-year-old woman who died after giving birth at Sligo General Hospital three years ago.”

“Dhara Kivlehan died after developing pre-eclampsia and a related condition in 2010.”

“The High Court heard she did not receive the appropriate specialist medical treatment while in multi-organ failure at Sligo General. ”

Judge Mary Irvine said it was the third case in a week where the HSE had held out until almost the bitter end, causing great distress to a family.”

Solicitor for Dhara’s husband, Michael Kivlehan, Damien Tansey spoke to Seán O’Rourke on RTÉ Radio One this morning about the death of Dhara Kivlehan in Belfast’s Royal Victoria Hospital – where she was airlifted to from Sligo before her death. She survived for four days in Belfast.

Mr Tansey said there were echoes of Savita Halappanavar’s death in that of Dhara.

“Just as in the Halappanavar case, you have a young woman in a hospital run by the HSE for what would be, normally, a routine procedure, childbirth and she died tragically and leaving behind her husband and young child. So it is a desperately tragic case.”

“The Kivlehan family have been looking for an inquest since this tragedy occurred. The normal practice is that an inquest is held in the place that the death arises. In this particular case, death arose in Belfast. Now we asked the Coroner General in Belfast, a Mr [John] Lecky to convene an inquest  and he refused our application until ultimately when we assembled reports from world-class experts, indicating a clear case of negligence on the part of the HSE in Sligo, was he moved to decide to hold an inquest. He made that decision earlier this year and indeed there was a preliminary hearing in the Coroner’s Court in Belfast in September of this year. The inquest itself was to proceed in Enniskillen on the 21st of October earlier this year and it transpired that the doctors who were involved in the treatment of the dead Mrs Kivlehan would not cooperate, would not travel north to assist in the inquest and so the wisdom of having an inquest in the north, where the principal players are refusing to co-operate is highly questionable and, of course, the Coroner General in the North has no jurisdiction of compellability over the doctors in the south. We also asked the Coroner in Sligo to convene an inquest and he refused and we asked the Attorney General  to direct him to convene an inquest and, to date, he hasn’t given that direction.

“In the Halappanavar case, they had an inquest within a matter of months. In this particular case, the Kivlehan family and the Sandhu family, in India, have been presented with no oppurtunity to investigate the circumstances of her death so some of the questions that you’re [O’Rourke] now asking would be dealt with and addressed and perhaps answered.”