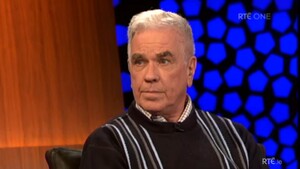 Veteran homeless campaigner Fr Peter McVerry appeared on the Late Late Show on Friday with Peter Coonan, of Love/Hate, and photographer  Perry Ogden to promote the Blue Hat campaign and discuss the homelessness crisis in Ireland.

Ryan Turbridy: “Where are they {the homeless} coming from?”

McVerry;: “Coming from? – they’re coming from, sometimes broken relationships, if anybody sharing accommodation with a partner, or with friends, and that relationship breaks down, and you don’t have any money – you become homeless. Other people may be losing their accommodation in the private rental sector because as the rents are going up – they simply become unable to afford the rents – sometimes for a variety of reasons – but there is that flood of homelessness and there is no plan to deal with it.”

Tubridy: “You’ve been doing this, you’ve been involved with the homeless charity for thirty years, or thereabouts – how bad is it now, 2013/2014, compared to recent time?”

McVerry: “It is the worst now, than I have ever known.”

McVerry: “Ever, in thirty five years. It’s much much worse now – and the frustration level of homeless people is rising, it’s becoming impossible now for a homeless person to get out of homelessness – the normal exit out of homelessness was into the private sector – that’s become almost impossible, by a shortage of private rented accommodation and almost all landlords now are taking cash-only. They are not prepared to take somebody who is dependent on a government rent supplement for their accommodation. If you go onto a web-site like Daft.ie where flats and apartments are advertised, you might find a hundred apartments, maybe one of them will take a rent supplement – and usually that one will be of such poor quality that the only reason that they’re taking rent suplement is that nobody else would take it – but if you’re homeless, you’ll take anything.”

Tubridy: “Okay, well people often say, ‘Well why not use those ghost estates, or the NAMA re-possession places to offer as alternative accommodation for homeless people?’. What would you say?”

McVerry: “NAMA could make a contribution – a small contribution – but many of the ghost estates are not suitable accommodation for homeless people, many are on the outskirts of towns – there’s no public transport, there’s no schools, no shops…”

Tubridy: “That’s why they’re ghost estates, nobody wants to live there?”

McVerry: “Well, that’s why they’re unsuitable for homeless people – that is why there is no solution to homelessness unless the Government starts to invest in social housing.”

Tubridy: “And do you think that that’s going to happen?”

McVerry: “Oh, not a chance, the Government’s plan for social housing is that they’re going to build five hundred social housing units over the next three years.”

Tubridy: “And what needs to happen, in your eyes?”

McVerry: “We need to invest heavily – you know, we have Newland’s Cross traffic lights – I don’t know if anybody drives there, but they’re removing the lights there at Newlands Cross, so that you can drive from Belfast to Limerick without stopping. The cost of removing those traffic lights and replacing them with a free-flow junction is in the region of €100 million. That would buy 1,000 apartments at current prices and there are, in the Dublin area 1,200 approximately, household units – you could almost eliminate homelessness with the money that’s being spent on those…..{Newlands Cross lights}”

Tubridy: “…When you put it like that, that starkly and that simply, and I presume you talk to Government all the time about these things – what do they say, when you say, ‘Look it’s this simple.’?”

Previously: The Highest Number Ever Recorded