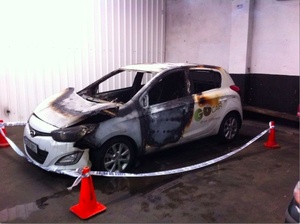 The charred remains of a GoCar vehicle (above) at the weekend [part of a Dublin-based start-up’s ‘car by the hour’ scheme].

But thanks to an “advanced mobilising system” the car wouldn’t start.

So they set fire to it.

“ The car is now completely written off and it has cost GoCar over €10,000. That is a bitter pill for any company to swallow.”

Previously: By The Hour

By The Hour, You Say?