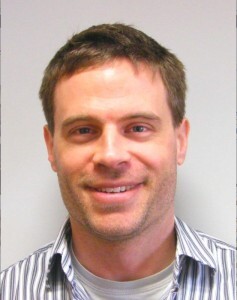 [Julien Mercille, top and a Irish Times banner ad from 2011]

The general stance in favour of fiscal consolidation presented by news organisations is illustrated by an editorial statement in the Irish Times that called for a campaign to ‘educate’ the public about the need for reducing the deficit. ‘Members of the general public still do not appreciate the possible extent of the economic downturn’, given that two-thirds of respondents in a national poll ‘took the view that the Budget was too tough, with 10 per cent believing it was not tough enough’.

You may recall UCD Professor Julien Mercille and his damning academic study on the Irish media’s role in inflating the boom (and the hand to hand combat with economist Marc Coleman over same).

Dr Mercille has now turned his attention to whether newspaper coverage of austerity policies in Ireland has been fair and balanced.

Anybody who reads the Irish press knows that it varies from centre-right to right. There’s almost nothing left of centre.

Ireland is actually quite special in this respect in Europe. There’s no equivalent of the British Guardian here for example. No Monde Diplomatique either.

I wanted to see how this played out in the coverage of austerity since 2008.

The main conclusion: the media have been relentless cheerleaders for austerity.

The key points of the study revealed:

(1) Support for fiscal consolidation is overwhelming: only 10% of articles on the topic are against it, 58% support it, and 32% don’t voice a clear opinion.

(2) Keynesian stimulus is out of the picture: only 2% of articles stated a preference for increasing government spending. This is astonishing. It is the main progressive alternative to austerity, but yet, we never hear about it.

(3) Those who say that trade unions monopolize the debate are dead wrong: excluding regular journalists, 29% of the authors of the articles are mainstream economists, 28% are working in the financial or corporate sector, and 20% are political officials in the three main political parties, which have all supported austerity. In short, the overwhelming majority of writers (77%) come from elite political or economic elite institutions. The remainder is composed of 9% of academics (excluding mainstream economists), 7% of members of progressive organisations (like Social Justice Ireland), and only 3% are trade union officials. It is thus a very conservative cast of writers who are allowed to take part in the debate in the national media.

The media have announced their role in convincing the public that austerity is good for them very clearly.

At the outset of the crisis, in November 2008, an Irish Times editorial called for a campaign to ‘educate’ the population about the need for austerity and ‘civic discipline’.

The problem was that Irish people did ‘not appreciate the possible extent of the economic downturn’ because only 10% of them thought the budget should be tougher while two-thirds thought it should be less tough, according to a national poll. The editors thus concluded that ‘the Government will have a major job to do in educating public opinion about unpalatable economic realities and the need for civic discipline’.

The case is so overwhelming that it may even surprise its proponents.

Julien Mercille is the author of the forthcoming book The Role of the Media in the European Economic Crisis: The Case of Ireland (Routledge, June 2014).