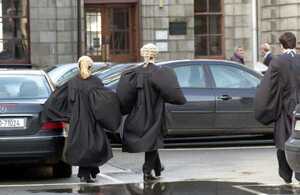 The Irish Times this morning reveals  a cabinet “clash” between Tanaiste Eamon Gilmore and Minister for Justice Alan Shatter over the Legal Services Regulation Bill 2011.

More specifically Part 7 of the bill, dealing with the establishment of ‘legal and multi-disciplinary partnerships’.

Legal Coffee Drinker: “The Legal Services Regulation Bill is Minister for Justice Alan Shatter’s attempt to change the way the legal profession operates in Ireland. Nothing wrong in that in itself, but the controversy arises from the nature of the changes proposed.”

Broadsheet: “For our younger readers how does the legal profession operate now?”

LCD: “At the moment the legal profession in Ireland is divided between solicitors (who deal directly with the public on a wide variety of legal services, normally excluding court advocacy above District Court level) and barristers (who deal with advocacy and specialised opinion work, usually acting on the instructions of solicitors only, though with some facility for members of professional organisations to seek opinions on non-litigious matters through the Direct Professional Assistance Scheme. Both wings of the profession are under the control of their respective professional bodies; the Law Society in the case of Solicitors and the Bar Council in the case of Barristers.

Broadsheet: “And the changes?”

LCD: “What the Bill proposes is that both solicitors and barristers should be subject to the control of a new Legal Services Regulatory Authority, answerable to the Government and with majority lay membership and a lay chairperson. The Authority will set education and training standards, professional indemnity insurance levels and inspect and deal with complaints against legal practitioners, and keep the Minister informed of developments in relation to the provision of legal services. A new system for dealing with complaints against legal practitioners is outlined in Part 5 of the Bill and involves the initial processing of the complaint by a Complaints Committee followed by referral to a Legal Practitioners Disciplinary Tribunal, which, like the Authority, has majority lay representation and which may refer the matter to the High Court for appropriate sanction. There’s also a proposal for reform of the legal costs regime by setting up a new Legal Costs Adjudicator.”

LCD: “Most controversially Part 7 of the Bill contemplates the establishment of legal partnerships between solicitors, barristers and other professionals. This appears to be the part of the Bill that generated the controversy in Cabinet. The key provision here is Section 74, which removes all prohibitions on the provision by legal practitioners of legal services as a partner or employee of a multi-disciplinary practice. This effectively allows barristers to operate in partnership with other barristers, with solicitors and with other professionals, in a way which has not previously been possible.
Part 7 does not however lay down any controls on how the proposed partnerships are to operate. What it does to is to require the Legal Services Regulatory Authority to engage in a public consultation process, to be completed within 18 months of the establishment of the Authority, and to provide a report to the Minister on the manner in which legal partnerships and multi-disciplinary practices should be formed and operated, the reforms, whether administrative, legislative or to existing professional codes, that are required in order to facilitate such establishment and operation, and the implications of barristers being permitted to receive instructions directly from persons in contentious matters and the reforms, whether administrative, legislative or to existing professional codes, that would be necessary to allow this.
The Bar Council has strongly objected to the partnership provisions. Some of its objections, as set out in a speech by its Chairman [available here], are as follows:-

– Most other jurisdictions have refused to accept similar barrister partnership provisions (though it is noted some have not ruled out accepting such structures);

– The establishment of partnerships will make it very difficult for younger barristers to get work and in this way make the legal profession more rather than less exclusive;

– It will also make legal advice more exclusive – the best practitioners will conglomerate together, acting for the most financially lucrative clients, making it difficult for those who cannot afford to pay them or are not well-connected enough to obtain their services. At present barristers – even those most in demand – act for a wide variety of solicitors, both large and small, and a wide variety of clients.“

LCD: “Well, it’s difficult for me to be entirely objective on this point [refills coffee] But I’d suggest that the starting point, in looking at any proposed change to the legal profession, is how that change will impact on society generally rather than the profession specifically (although change to the profession, making it more rather than less exclusive, can itself have a trickle-down effect on society)….

LCD: “The first question anyone examining the Bill should be asking themselves is whether, whether or not the changes proposed are going to benefit the ordinary punter availing of legal services in the future.
If yes, the second thing they should be asking is whether or not the changes are the most effective way of achieving this benefit or whether or it could equally be achieved by less expensive/less radical means. My own opinion, for what it’s worth, is that the most effective way to carry out any legal reform is by a KISS (Keep It Simple, Stupid); effecting no more change than is absolutely necessary to achieve the desired result and that in the most cost-effective manner possible.
It goes without saying that any proposed change should be clearly and comprehensively defined in the legislation which proposes it, because without this information it’s not possible for legislators – or the public at large – to make a judgment either on benefit or proportionality of change.”
Applying this to the legal partnership provisions of the Bill – and leaving aside the potential harms warned about by the Bar Council – on which Broadsheet readers can make up their own minds – it is not clear what actual benefit a legal partnership facility will have for the public generally.”
Secondly (and this is part of what makes it difficult to identify benefit), the nature of the partnership system proposed (e.g. the controls on it, and how it will be regulated), is completely undefined in the Bill. It’s lazy (some might say deliberately lazy) drafting, and – although I don’t know his specific objections – I can well understand how the Tanaiste might be getting heated about this part of the Bill.”

LCD: “…But it’s not just the Tanaiste who should be getting upset. Legal access, and how it operates, is a matter of concern for the citizen generally, and an important aspect of democracy. This Bill is too important for any part of it to be a legislative blank cheque. There needs to be firming up on the nature and regulation of the partnerships contemplated by Part 7 before any informed legislative vote on this point can take place. [drains cup] Hopefully the Bill will be amended to deal with this, so that the benefits or otherwise of the contemplated legal partnership system can be properly assessed. If this doesn’t happen, and the Bill is passed without clarification, the new legal partnerships will, potentially, be entirely unregulated – ironic given that the selling point of the legislation which produced them was to more tightly regulate the legal profession!”

Broadsheet: ” A lot to think about there. Thanks legal Coffee Drinker. And have a Happy Xmas.”