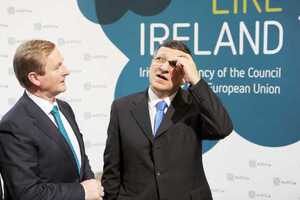 Irish officials have insisted that the possibility of the EU’s permanent bailout fund, the European Stability Mechanism, retroactively recapitalising Irish banks is still a work in progress.
In response to European Commission President Jose Manuel Barroso appearing to pour cold water on the idea at a summit of EU leaders in Brussels, officials stressed that the negotiating process is ongoing.
Last night, Mr Barroso said the process was “for the future” and not “retroactive”.
However, the officials insist he was referring to a separate process relating to Europe’s forthcoming banking union, elements of which were agreed by finance ministers this week and which also involve the ESM.

That Would Be A Commercial Matter

A Quarter Of Bank Loans ‘Non-Performing’