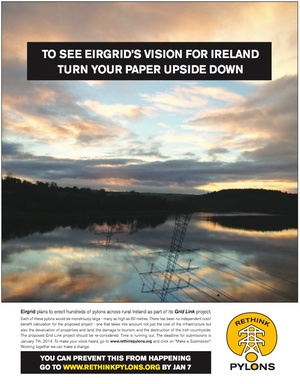 Speaking on Vinegar Hill, one local protester, Des O’Neill, said the public was still in the dark about the cost of these projects and it was unclear how the investment would benefit ordinary people. “The people of Ireland deserve better. We are totally opposed to the plan by the Irish and British governments to turn Ireland into a giant industrialised green energy zone,” he said.

As Tuesday’s deadline for public submissions approaches, the pressure is on Communications Minister Pat Rabbitte to contain rising anger and frustration from within Labour about his handling of the issue. Mr Rabbitte has laid the blame for the poor communication and consultation at the door of EirGrid, the State’s energy agency, saying it must “take lessons on board” He conceded that the process of communication and consultation around the pylons issue has not been good enough and needs to be improved.

The deadline to make submissions to Eirgrid is Tomorrow. People can do that by visiting Rethinkpylons.org