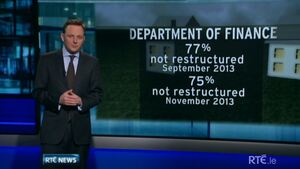 The Department of Finance’s latest figures on mortgage arrears for Ireland’s six biggest lenders involve some 80,000 mortgage holders who are three months behind with their loans.

While 77% of owner-occupier mortgages in arrears had not been restructured by the end of September last, that figure only dropped to 75% by the end of November.

An improvement of 2%, or approximately 300, of mortgage accounts ‘under reconstruction’.