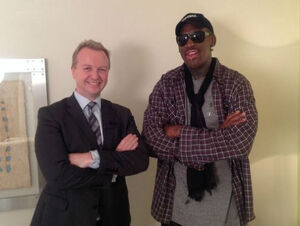 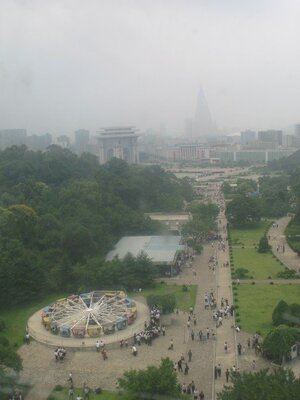 [Pyongyang in North Korea, top, and Matt Cooper and Dennis Rodman, above]

Matt Cooper talked to Fintan O’Toole on Today FM’s The Last Word, following his trip this week to Pyongyang in North Korea with US basketball player, Dennis Rodman.

Mr Cooper was there as part of a documentary team but also has plans to write a book on the event.

The match was originally sponsored by Paddy Power. However the bookmakers withdrew their support following the reported killing of Kim Jong-un’s uncle, Jang Song-taek, before Christmas. Although they withdrew their support, they honoured their ‘contractual obligations’ and financed the film crew which is making the documentary called ‘The Big Bang In Pyongyang’.

Fintan O’Toole: “Were you worried that there was a danger of you being sucked into a kind of trivialisation of the regime because the story is so colourful and, in some ways funny, that perhaps there’s some kind of fear that it distorts the seriousness of the underlying condition of things in North Korea.”

Matt Cooper: “Yeah, there’s no doubting the dreadfulness of what has happened in North Korea for generations now at this stage. The famine that you mentioned back in the 1990s, it’s reckoned that as many as two million people may have died as a result of bizarre and flawed economic policies and then you have the situation as well, whereby North Korea has managed to get aid on a number of occasions by effectively bluffing about its nuclear capacity but also developing nuclear capacity which is a threat, in particular to its neighbours in South Korea but it’s something that also worries Japan greatly as well, and even its closest ally China, is somewhat concerned by the way that North Korea behaves. There have been threats to the United States as well but nobody believes that the North Koreans are remotely close to being in a position to where they could actually send a nuclear weapon to the United States or could fire it at the United States. So, in those circumstances, yeah, I mean a basketball game looks like an exceptionally stupid way of actually trying to mend diplomatic bridges. But there is precedence in this regard, going back to how the relationship between China and the United States opened up back in the 1970s and so-called ping pong diplomacy. And the first visit by President Richard Nixon to China, back in the 1970s, came as a result of the goodwill created by a table tennis match, about six months earlier. Now, whether this is going to create any goodwill between North Korea and the United States in this basketball game is a moot point. But it should be remembered, Rodman is far from being the first American in recent years, to have travelled from the United States. Former President Bill Clinton went to Pyongyang in 2009. He was seeking the release of a couple of American journalists who were being held but he was there. A year ago, Sergey Brin, of Google, was a very high-profile visitor to Pyongyang and there was little enough said about that. The Philharmonic Orchestra, from New York, has also played in Pyongyang over the last five years. So, I think Rodman and his people were a little bit miffed to feel that they were being singled out for treatment that had not been meted out to others in previous years, and perhaps more significant people, who had travelled into North Korea. But the problem for Rodman is that the behaviour of Kim Jong-un over the last year has been exceptionally eratic and culminating of course last month, in the what’s been described as the purging of his uncle Sang, who was regarded as his regent after his father died. His purging was done. But in a step, a step that was quiet chilling as well as being extraordinary, first of all, his pictures were removed from all previous state publications and then it was announced that he had been executed and the statement of execution was absolutely chilling in the language that was used.”

O’Toole: “You were at the game obviously which was the centre-piece of this whole visit. It seems, from what he can gather, to have been a tardy, staged event with 40,000 people singing ‘Happy Birthday’ to Kim.”

Cooper: “Led by Dennis Rodman, which was cringe-inducing to watch.”

O’Toole: “I mean just tell us about that, what was it like to be there?”

Cooper: “It was an extraordinary atmosphere in the sense that, before the game, it was almost deathly quiet and then Kim arrived with his wife, and even that was significant because there had been rumours that she may have been purged as well. But she was certainly very much alive and there, at the game on Wednesday. And the crowed erupted in a way that you would rarely see. It was spontaneous, and it did seem to be an outpouring of emotion, it was quite extraordinary to see the enthusiasm with which they cheered and clapped. But, that said, it reminded me almost of, I was thinking, would this ever happen in Ireland, we would never greet our political leaders in the way that this dictator was being greeted. But then I developed a flashback to when Pope John Paul II came to Ireland in 1979, it was almost that exact same outpouring of emotion and pure joy to see somebody come amongst their midst. And that was the sort of reaction that they had to him, that went on for a little while. Then, at the end, when he got back up to go as well, there was cheering and chanting and it seemed genuine, it seemed, and this is one of the things, it seems that the population is so brainwashed by the cult of the leadership, over the last couple of generations, that this seems to be utterly spontaneous and utterly genuine, in a way that they actually behave towards him. So, it was a difficult situation I think for some of the American players. I know, from having spent time with them that they were uncomfortable with some of the publicity and the build-up to the match and they were uncomfortable with the circumstances in which they were there. And, but at the same time, they just got involved and played the basketball match with the other basketball players. It was a very, very odd, odd situation. But, perhaps no more odd than some other choreographed things we’ve seen in other places.”

O’Toole: “Did you manage to meet Kim Jong-un yourself?”

Cooper: “No. I was sitting reasonably close to him, I would have been within about 20 feet of him, two rows back, but he certainly doesn’t meet with the media, no. He wasn’t. And there were also restrictions placed on our camera crew as well. They were allowed certain positions on one side of the court but they were placed so that they couldn’t turn and point the camera at Kim, so they actually never got to see him during the actual game. And then when he met with the team, afterwards, outside in the corridor, they were refused access to that as well. But there was about 10 minutes on state television last night of the match, highlights of Kim greeting the players and greeting people and that was rather extraordinary propaganda to watch, and the way it was packaged.”

O’Toole: “Were you able to talk freely at all or to move freely at all? To get your own sense of what life is like for ordinary North Koreans?”

Cooper: “No. I was accompanied at all times. Any time, even from the time I entered the lobby in the hotel, when I came down from my room, we weren’t allowed out on our own, we weren’t allowed out on foot, we had to drive everywhere, to all the places we were brought. I mean that’s something that we had anticipated, we knew there was no chance that we were actually going to get out and about and get away from our minders throughout the week. That was one of the conditions unfortunately we knew we’d have to operate under. But..”

Cooper: “We were able to, yes. Much to my surprise , we were given internet access. We negotiated internet access and got it after two days. Our mobile phones didn’t work, there was no wifi in the hotel. But we were able to plug in a laptop to actually find out what was going on back home. And I was actually able to ring home and talk daily to my wife, to fill her in on how things were going. But we were working under the assumption that the phones were tapped and that we were being watched at all times.”

O’Toole: “What’s your sense? I know it’s very difficult, over four days, in those restrictive conditions to get a really accurate sense of what’s going on. But you would have some journalistic feel for it. And I suppose one of the mysteries about North Korea is trying to judge the extent of people behave as they do and you were describing as kind of spontaneous cheering of the Great Leader. But do you think they behave the way they do because they’re simply terrified , and they know the costs of not doing it, or is there also an element of people being brainwashed, many people have grown up knowing nothing else but this family, that they genuinely do believe that these are the people to whom they owe their survival.”

Cooper: “I suspect, at this stage, it’s the latter, because it has been going on so long. And, certainly from what I have read before I came out here, in the many books that I read to try and get a better feeling of what things were like in North Korea. It has been, it’s certainly fear and terror were the ways the regime established its control but, over time, certainly for those who were perhaps among the better off they know of nothing else. They don’t understand anything else. So they just sort of, automatically, buy into it. We didn’t get any sense, we got some sense, perhaps of some embarrassment over some of unfinished buildings. There’s one extraordinary hotel that was built in the shape of, believe it or not, a rocket – which is the tallest building in Pyongyang which has been under construction for over 10 years at this stage and still has not been finished off. And, every time we tried to ask questions about that, there was almost a mumble and then a silence, rather than any explanation as to why this wasn’t been actually been shown to us, amongst the various monuments. They seem to have spent this extraordinary amount of money building all sorts of extraordinary monuments to the regime and it’s all pervasive, for one thing, for example, there’s no advertising of any description, throughout the city. However, there’s propaganda because you see pictures of the leader, and his predecessors, on almost every single building. You see all these remarkable paintings of, which are normally of snow-capped mountains and Kim Jung-on standing on a grassy verge at the top of the, you know where the snow is melted and the flowers bursting forward and these are all symbols of the better society and what is overwhelmingly a very grey and dull-looking place.”

Not So Ronery Now

Come Gather ‘Round People Wherever You Roam