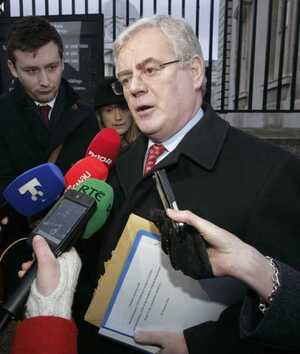 “The Government is set to reopen the Vatican embassy, The Irish Times has learned. The Cabinet is this morning considering a request from Tánaiste Eamon Gilmore to open eight new embassies and consulates at its weekly meeting. The list includes re-opening the Vatican embassy, as well as new embassies in Bangkok, Jakarta, Nairobi, Zagreb and consulates in Austin, Texas, in the US, Hong Kong and Sau Paulo.”

The Irish Times this morning.

“The Government has “no plan” to reopen the Irish Embassy to the Holy See, Tánaiste Eamon Gilmore has said. In a written response to a question posed by Fianna Fáil leader Micheál Martin, Foreign Minister Gilmore said he “will be keeping the deployment of our diplomatic and consular resources under review in light of ongoing national priorities and the availability of resources”. However, the Tánaiste said “there is no plan to re-establish a resident embassy to the Holy See in the immediate term”.