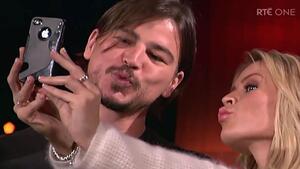 Plucked from the audience.

Not that I’m an overly suspicious sort (I am though) but the fact that this model-looking lady was picked immediately out of the crowd, had a camera at the ready and that Ryan mentioned we might know her from magazines suggests she might possibly (definitely) be some kind of plant. It might just have been to keep the stunt running smoothly, or ensure a good picture, but that doesn’t make it seem any less staged. Sure enough, it’s Ireland’s own Karena Graham – who has done a spot of modelling in her time…

So When Are You Going To Unleash Magnum On Us?