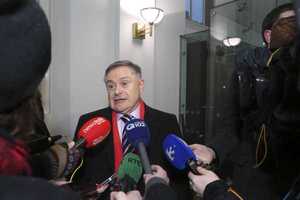 Brendan Howlin has joined calls for for the Pubic Accounts Committee to stop its current line of investigation into the penalty points controversy.

Brendan Howlin: “I sought last year or the year before that in fact, for the people to give further powers to the Oireachtas so that we could have inquiries, so that people could be called and give evidence and so those committees could come to conclusions, now the people didn’t accept my recommendations in that and I think part of the fears that arose during that debate was that people would politicise the process and I think that we have to prove to the people we can conduct inquiries as an Oireachtas in a fair and impartial way, that we don’t parse and analyse or give our personal opinions on evidence on a daily basis…”

Unidentified reporter: “Does that give you any concern about a banking inquiry dealing with these members and showing a capacity to maybe overstep the mark on occasion?”

Howlin: “Well we’ve set out in clear legislation now that there… what must be in place before we can have a full inquiry of the type that now will be embarked upon to see what happened leading up to our economic collapse and I think there’ll have to be a very clear understanding that that’s a process not an event that people can march out daily and give their opinions on, it has to be a thorough, impartial, fair analysis of fact and everybody has to be given fair weight and due time to present their case before conclusions are arrived at or opinions are voiced by individual members.”

Howlin In The Wind

Through The Looking Glass