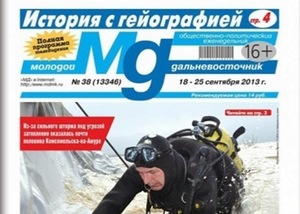 A Russian newspaper editor has been fined 50,000 roubles (£860) under the ‘gay propaganda’ law for printing that “being gay is normal”.

Alexander Suturin, the editor-in-chief of newspaper Molodoi Dalnevostochnik (above), was found guilty of breaking the law, as the article propagated “homosexual relations”. In being found guilty, his newspaper became the first media outlet to have been found in breach of the law.

Previously: “Leave The Children In Peace”

“Leave The Children In Peace”

Rainbow On His Parade