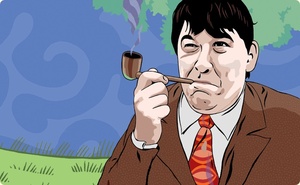 RTÉ & BBC to co-produce new Graham Linehan & Diet Of Worms sitcom set in Dublin. ‘The Walshes’ will air on RTÉ One later this year

The Walshes are a warm, tight-knit family from the West Dublin suburb of Strollinstown. Tony (Niall Gaffney) and Carmel (Philippa Dunne) are parents to Ciara (Amy Stephenson) and Rory (Rory Connolly), who are both still at home because the state of the Irish economy has forced them all back together.

Even Ciara’s new boyfriend Graham (Shane Langan) is forced to move in and family friend Martin (Owen Roe) always seems to be hanging around mending bits and pieces, as well as accidentally becoming trapped in the wall cavity.

Graham Linehan vs MOD. It’s So On!