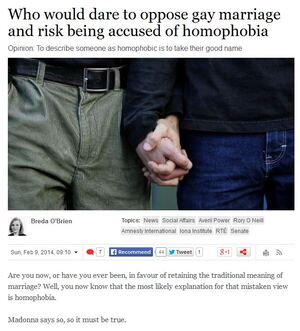 At time of writing the column does not appear on the paper’s website (which would usually be the case). We will remove this post once that does happen. We are reprinting Mrs O’Brien’s column because it is an important contribution to the homophobia debate and in the public interest that it be made available online.

It may be worth noting that neither Breda O’Brien nor John Waters appear on the list of Irish Times columnists on the paper’s site this evening.

Who would dare to oppose gay marriage and risk being accused of homophobia (Breda O’Brien, Irish Times)