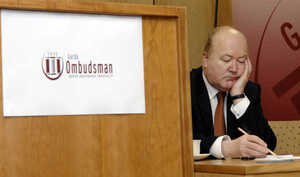 @ConorPMBrady finding proof of who bugged its office should be a greater priority.

From the Garda Ombudsman’s office:

Security at and surveillance of Garda Síochána Ombudsman Commission In the course of our operations the Commission has always been conscious of the need for appropriate confidentiality and proper levels of security. The Commission has brought this to the attention of staff from time to time. On two occasions, since commencing operations, security experts have been consulted. A sweep of the building, and tests on the integrity of our telecommunications security, have been undertaken.

A security sweep of GSOC’s offices was conducted on the evenings of 23 to 27 September, 2013. This was conducted by a specialist UK security firm that had been recommended. The overall cost of the security checks undertaken was just under €18,000.

As well as the general check of our building, the Commission also sought expert advice on the sorts of capabilities that exist in relation to the interception of communications, including telephones.

The investigation was completed on 17 December, 2013. It confirmed the existence of three technical and electronic anomalies. These could not be conclusively explained and raised concerns among the investigation team in terms of the integrity of GSOC’s communications security. However GSOC is satisfied that its databases were not compromised. Since the investigation concluded, we have been working to review and enhance our security systems in the light of what the investigation revealed.

There was no evidence of Garda misconduct. The Commission decided to discontinue the investigation on the basis that no further action was necessary or reasonably practicable.

Given the outcome of the investigation, GSOC recognised the need to reinforce the security of our telecommunications systems in the light of the specialist’s advice. We took the difficult decision not to report this matter to other parties. We did not wish to point fingers unnecessarily and we did not believe that widespread reporting would be conducive to public confidence. We took the decision not to report in good faith. We regret that now and this was communicated to the Minister for Justice and Equality by Simon O’Brien, Chairman of the Commission, this afternoon.

Earlier: Agents Of This State or other Rogue Elements

I have read very carefully the contents of the Garda Síochána Ombudsman Commission’s statement this evening and note in particular the assertion that there was no evidence of Garda misconduct.

It is a cause of grave concern that the Garda Síochána Ombudsman Commission’s statement contains a clear indication that An Garda Síochána was in some way suspected of complicity in this matter despite GSOC’s overall finding that the existence of technical and electronic anomalies could not be conclusively explained.

I am now seeking clarification from the Garda Síochána Ombudsman Commission in respect of the following issues resulting from its statement.

The nature and extent of the anomalies identified by the UK security consultancy?
Do these anomalies amount to a security breach and is a criminal offence suspected?
The basis for the suspicion of Garda misconduct?
Whether any matters identified now require investigation by An Garda Síochána?

Who Let Grandpa On The Internet?