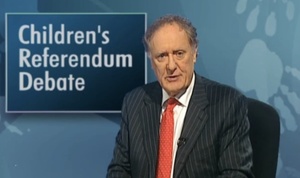 A few minutes before the [TV3] debate ended, John Waters suddenly turned on me, and launched into a tirade about my motives, and those of the organisation I work for, in being involved in the campaign at all. Browne eventually interrupted him, and told him that he had directly impugned the integrity of a decent and respectable organisation, and that I had to have a right of reply.

Taken aback by the ferocity of Waters’ verbal assault, I stumbled through a couple of sentences, and the programme came to an end. When the cameras had stopped, Browne remonstrated with Waters. “You simply can’t say that sort of thing, John,” he said. Waters grinned, and replied that it was just the give and take of a robust debate!

I went over to him, and told him he was a disgrace (I may not have been quite as polite as that). A few minutes later, I noticed Browne in huddled conversation with his producer. They told me that they were considering editing the last few minutes of the programme, because there had been a pretty clear defamation. I said I believed it was important the debate be broadcast in its entirety, and gave them both an assurance that Barnardos would take no action on foot of the broadcast.

In the end — actually, immediately — they decided to cut the programme short by what they said was two and half minutes, because Waters had been so (allegedly) defamatory that anyone who worked for Barnardos could consider taking an action….

We can’t let fear get in the way of backing same-sex marriage (Fergus Finlay, Irish Examiner)

Earlier: “With The Megaphone Comes A Duty”