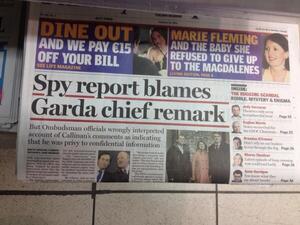 Alternatively, in the same paper…..

I refer to the collusion of political and security commentators – whom I call PolSec in honour of Orwell – who conducted last week’s campaign in favour of Callinan and against Simon O’Brien. Thanks to our restrictive libel laws, I cannot spell out the names.

Actually, there is no need for me to name the PolSec cheerleaders. The whole country was talking about what absolute asses they made of themselves. At one stage they gave the impression of wearing garda uniforms with lots of gold braid.

But what really reinforced public scepticism about the PolSec campaign to promote Callinan at the expense of [Simon] O’Brien was that it was a repeat performance. A few weeks ago the same pundits were rubbishing the garda whistleblowers, whose proposed evidence to PAC Callinan pronounced “disgusting”.

By now the public can detect what Myles na gCopaleen called “Droch Bholadh sa Tig Againn” (a bad smell in our house). That smell is coming from a section of the media which has stupidly hitched its wagon to a Coalition star. Stupidly, because in a small country the public knows when the media is muzzling itself.

The third threat mentioned in the GSOC briefing note (page 2, about halfway down) was the presence of a UK 3G mobile phone network in the middle of Dublin. This, according to the British firm Verrimus which investigated the GSOC case, was probably created by a device which transmits a falsified mobile phone network, usually with the intent of encourage mobile phones to use its facilities so that the resulting communications can be intercepted.

GSOC’s briefing to Minister Shatter bluntly explained to him that the means required to attempt such surveillance are “only available to government agencies” [emphasis mine]. The only reason Verrimus couldn’t conclude that it was being used for GSOC surveillance is because it could, possibly, have been used for legitimate reasons in a nearby area.

Alan Shatter, as both the Minister for Justice and the Minister for Defence, does not have such limitations. He has the state’s policing and military forces at his executive disposal. Shouldn’t he be able to find out who was operating a bogus mobile phone network in the urban centre of Ireland’s capital city – and whether it was legal for them to do so?

Why Do We Need Proof Of GSOC Before We Investigate (Gavan Reilly, Today FM)

Previously: Catcher And The Spies 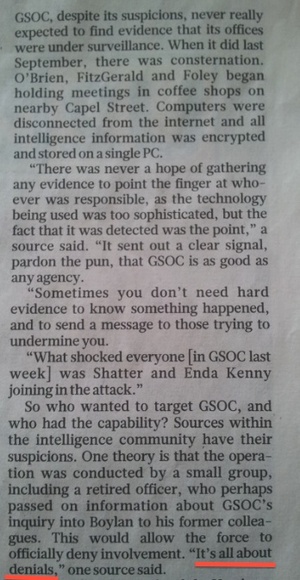