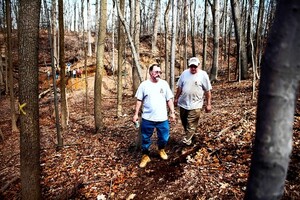 On a cold winter’s day, historian Bill Watson found himself standing in the snow, picking through the roots of an upturned stump near railroad tracks in a place now known as Duffy’s Cut.

The exposed roots once held in their grip buttons, human bones and old coffin nails – vital clues in a centuries-old unsolved mystery.

The stump, pulled up several years ago, stood over the final resting place of seven of 57 Irish laborers who perished at the railroad construction site in 1832, during an outbreak of cholera. Also found at the scene was a skull that had been pierced by a bullet and cleaved by a hatchet.

“It’s not just cholera,” said Watson, who with his twin brother and fellow historian, Frank Watson, is leading the excavation project to piece together what may turn out to be a grisly tale of anti-immigration violence from the 1800s.

For the last 10 years, the Watsons and their research team have struggled to find out what happened to the crew toiling under a boss named Philip Duffy, as they cut a swath through the heavily wooded terrain to lay train tracks about 20 miles northwest of Philadelphia.

The brothers’ interest in the site began in 2002, when they discovered references to the immigrant laborers in a document file compiled nearly a century ago by Pennsylvania Railroad president Martin Clement and later kept by his personal assistant – the Watsons’ grandfather.

Those documents indicated that all 57 laborers, hired right off the boat from Ireland, died of cholera within six weeks of arrival. The number was far more than the eight deaths listed in local news accounts at the time.

While the cause appeared to be cholera, physical evidence uncovered at the scene also hinted at cruelty and murder, the Watson brothers said.

“We have no idea what percentage of these guys were murdered,” said Bill Watson, who chairs the history department at nearby Immaculata University. “But if we have 57, it’s the worst mass murder in Pennsylvania history.”
…
The most likely scenario, the historians say, is that the labourers had been isolated because of the cholera outbreak but some of them broke quarantine and local residents, already angry that an influx of Irish labourers had suppressed wages, lashed out in a wave of anti-immigration violence.